Skip to content
Where the magic happens for Steph Bowe 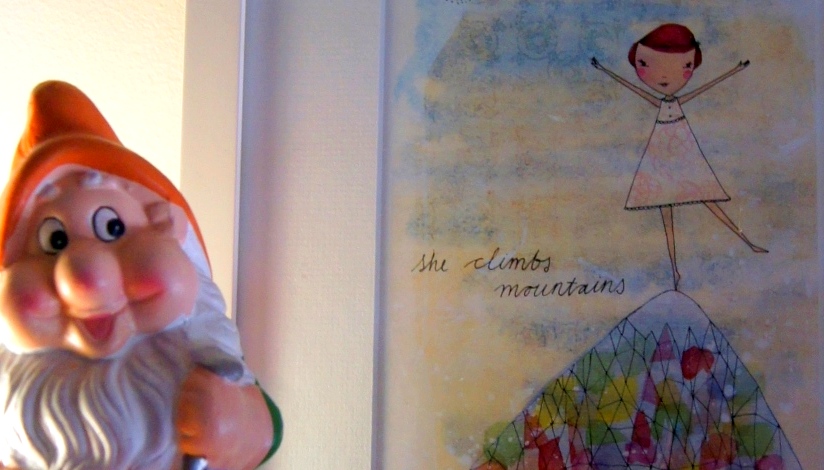 This next guest post is so gloriously funny and smart and generous that I feel happy for you who are about to read it! Goes without saying that Steph Bowe is all of those things, but on the subject of her generosity let me just add that I have learned heaps from what she has to say about blogging and writing on her website (sure, I don’t always put it into practice, but I do feel a lot less intimidated thanks to Steph’s sharing). So, Happy Friday, because you are about to laugh – is there any greater gift? And please don’t forget to show Steph some appreciation, because this is gold, I tell you, GOLD! 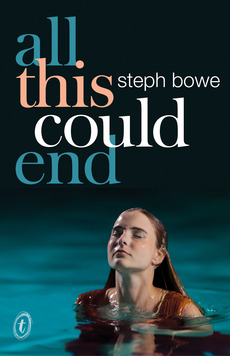 My writing set-up hasn’t changed very much at all over the years – I’ve always been typing away on stories in the corner of my room, ever since I was a little kid. It’s a different room now, but the same set-up. I have a second-hand roll top desk. I’ve always had a window by my desk, even in a different house, and a view from that window which is not very exciting. That’s important. If I had a good view, I’d be staring out the window all day. (I still get spellbound watching an ibis on next door’s roof. Why is it there? Where has it come from? Where is it going? Should I have a cup of tea?)

I write on a little Toshiba laptop I’ve had for five years. I don’t like to replace things until it’s really, really necessary (throwing away computers seems so wasteful) and I fear the little laptop is reaching the end of its life. The battery no longer works, and I had to get the keyboard repaired last year because I am a violent typist. It runs Word, and that’s all I really need. 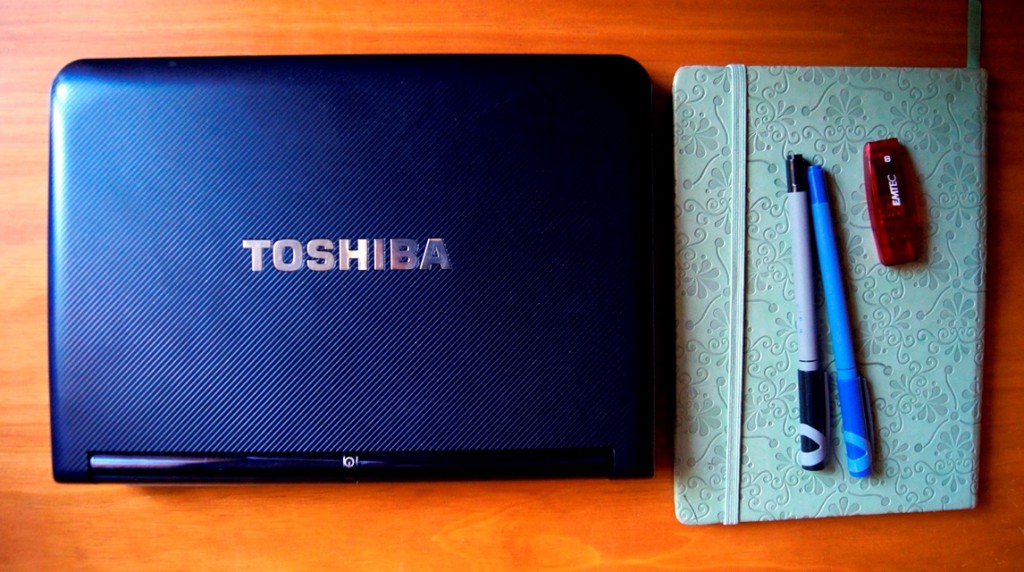 I used to have a lot of prerequisites for being able to write – a cup of tea, a piece of toast, the correct playlist, to be wearing the proper hat (I had a crown with foam letters that said ‘Author’ once; I don’t what happened to it, and I grieve the loss to this day). I imagined that the right computer or software or stationary would somehow make me a more legitimate writer. Eventually I realised I was complicating things unnecessarily, and none of it was going to make me write any better. So I keep my desk as simple and non-distracting as possible, and once I commit to sitting down to write, I just have to write.

Place matters to me a whole lot less than time of day. I’m a night-writer. (It’s far more dramatic.) I can and do write during the day but I’m much more likely to feel inspired in the evening. There’s less to distract me, little else to do, and ideas have been percolating in my head all day. I think working in the dark makes it a lot easier to forget the actual world and visualise the fictional realm I’m writing about.

Mostly I write at my desk at home, but I also write in libraries and hotel rooms and while visiting family. Different places offer different viewpoints and ideas. As long as I have a bit of quiet and no-one watching over my shoulder (people seeing what I write terrifies me, oddly), I can write.

Any talismans around? Feel like explaining them to us?

My first novel, Girl Saves Boy, featured a central character who compulsively stole garden gnomes. I have two gnomes (neither of which are stolen) – a large gnome from my mum, and a little gnome from a lovely student at a workshop I ran. They both live on my desk. I’d extend my collection but they’ll probably start encroaching on usable desk space. Do gnomes count as talismans? Having garden gnomes on one’s desk is a good reminder to stay weird. 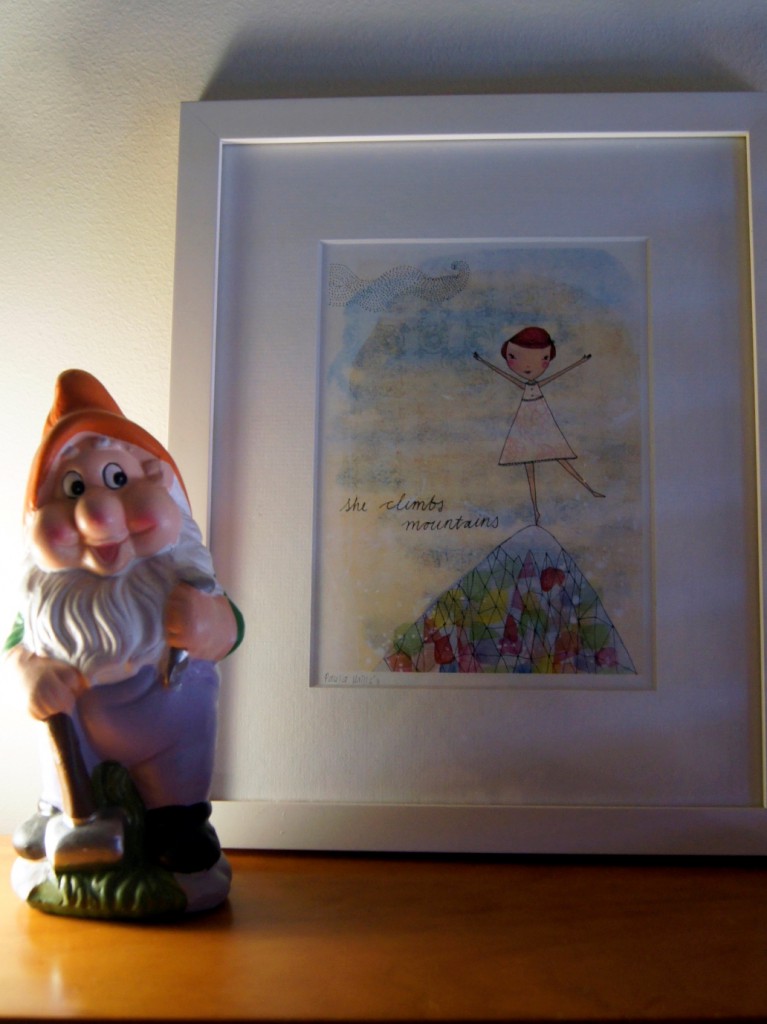 If, for some unexplained reason (but nothing too bad – we do like you after all) you had to get the hell out of there and you couldn’t go back, what 3 things would you take?

Ultimately it wouldn’t worry me that much – I’m not very sentimental about my stuff (if I felt like things outside myself and my brain were what empowered me to write stories, that would place a lot of pressure on that particular laptop or that particular space).

Even if I lose everything I’ve written I’ve learnt a lot from writing those things, and I don’t believe that ideas are ever in short supply. Losing work either via a) technological mishap or b) self-loathing mass-deletion is part of being a writer, anyway.

Social media – do you block it while you’re working, or let it come along for the ride?

I think it’s amazing to be able to build a community and connect with other writers and be inspired even when you’re sitting at the computer in your pyjamas. Unfortunately it’s a rabbit hole that’s very easy to disappear into for hours at a time – so for me it’s something that has to be sectioned off from writing, along with other things I rationalise as being ‘work’ that aren’t really work at all, like watching TV.

It’s too easy to get caught up in the things other people are accomplishing, and feel disappointed about my own lack of progress. Other people’s success can be motivating, but it can also make you feel crappy by comparison. The unfortunate effect of social media is it creates unreliable images of other people’s lives – for every book deal announcement, there are so many disappointments writers experience but don’t share, and a ridiculous amount of time and effort put into getting that book to publication.

What magic is happening in there right now?

I’m very much in love with the notion that writing is magic. As a child who devoured books at an extraordinary rate I didn’t even imagine writers as real people, just some sort of omnipotent force in the universe that impart stories (I have now met a lot of writers, and I still think they’re phenomenally talented, but I’m pretty sure most of them are human).

When I was a teenager writing my first novels, it felt very much like a magical process. Stories came to me with ease and it was incredibly fun to write and all my characters seemed authentic. The trouble with being a grown-up and a professional (ish) writer is that stresses of the real world tend to creep in. What if people hate this? What if it never sells? What if I’m a terrible writer? There’s nothing particularly magic about anxiety.

Now it’s much more: Sit down and work, every day, even if you don’t feel like it, even if you have nothing to write. Then, sometimes, if I’m lucky, the magic happens. But there’s certainly a lot of work involved to get to that point.

Was Virginia right? Do we need a room of our own?

I think having space of your own is important, but I also think if you’re in that space all the time you get too lonely. I find working in a quiet (non-distracting) corner of a library can make me feel like less of a recluse, seeing other people working near me. Writing around others present lots of opportunities for observation, which is one of my biggest sources of ideas. I do tend to get distracted by ridiculous thoughts, like ‘I wonder whether anyone else here is writing about zombies’.

Ever use longhand? Or is it all clickety-clackety?

I have always written by computer, even when I was a tiny kid. In those days I would type my stories out then erase them immediately, for no-one else to ever see. I liked the writing part, not having written something. I save my work now, as one must when one is trying to write a 60,000 word novel.

I write in longhand when I am struck by a genius idea in the middle of the night. Of course, by the time I wake up the next morning the idea seems far less genius. My handwriting is tiny, barely decipherable cursive, so it’s a pain to attempt to type it up, but when I’m stuck on something handwriting can be wonderful for unsticking my brain. (I am sure there is a very science-y explanation for it.) 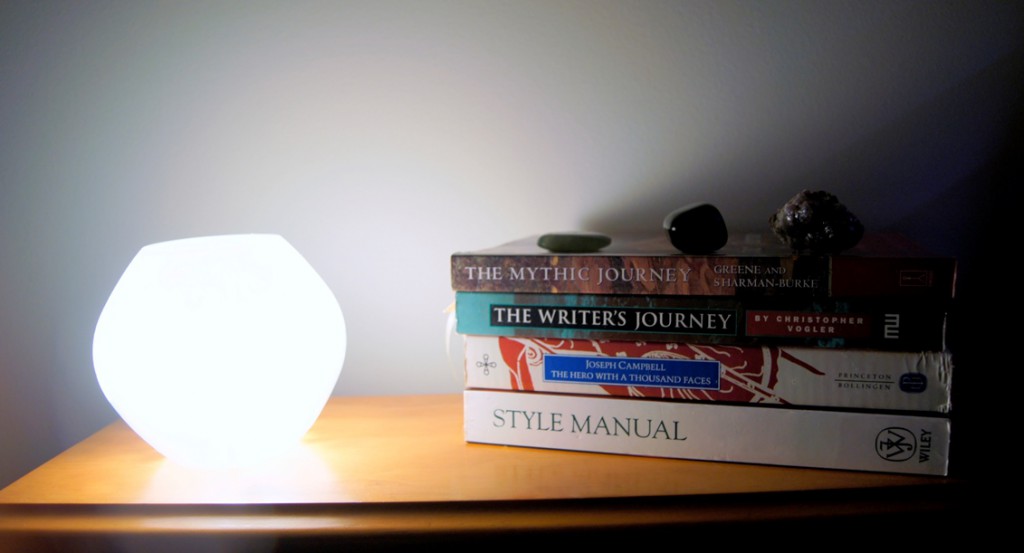 What you be sticking up on those walls?

I have a calendar blu-tacked to another wall that has every day of the year on it so I can I keep a tally of words written every day (plus, I am reminded stupidly quickly time is passing. Probably good for motivating myself to get things done). And over my desk, I have a lovely framed print from my aunt that reads ‘She climbs mountains’.

(I’ve always wanted to make mood boards for my novels and create sophisticated outlines with post-its on the wall, but every time I attempt something like that it all looks way too messy. I imagine a Proper Author can storyboard like a literary genius, but unfortunately it doesn’t quite gel with my writing philosophy, which is ‘make it up as I go along, and panic at regular intervals’.)

Thank you, Steph!  I was struck by the print your aunt had given you: She Climbs Mountains. Pinned to the wall above my desk is something I heard in a song once: A climber climbs with his guts, his brains, his soul and his feet. Anyone else think mountaineering is the perfect metaphor for writing? Also, if anyone knows the science-y reason for why longhand is so very good for unsticking the brain, please share. I’m pretty sure there is one, I just can’t remember what it is!