Skip to content
Where the magic happens for Daniel Herborn 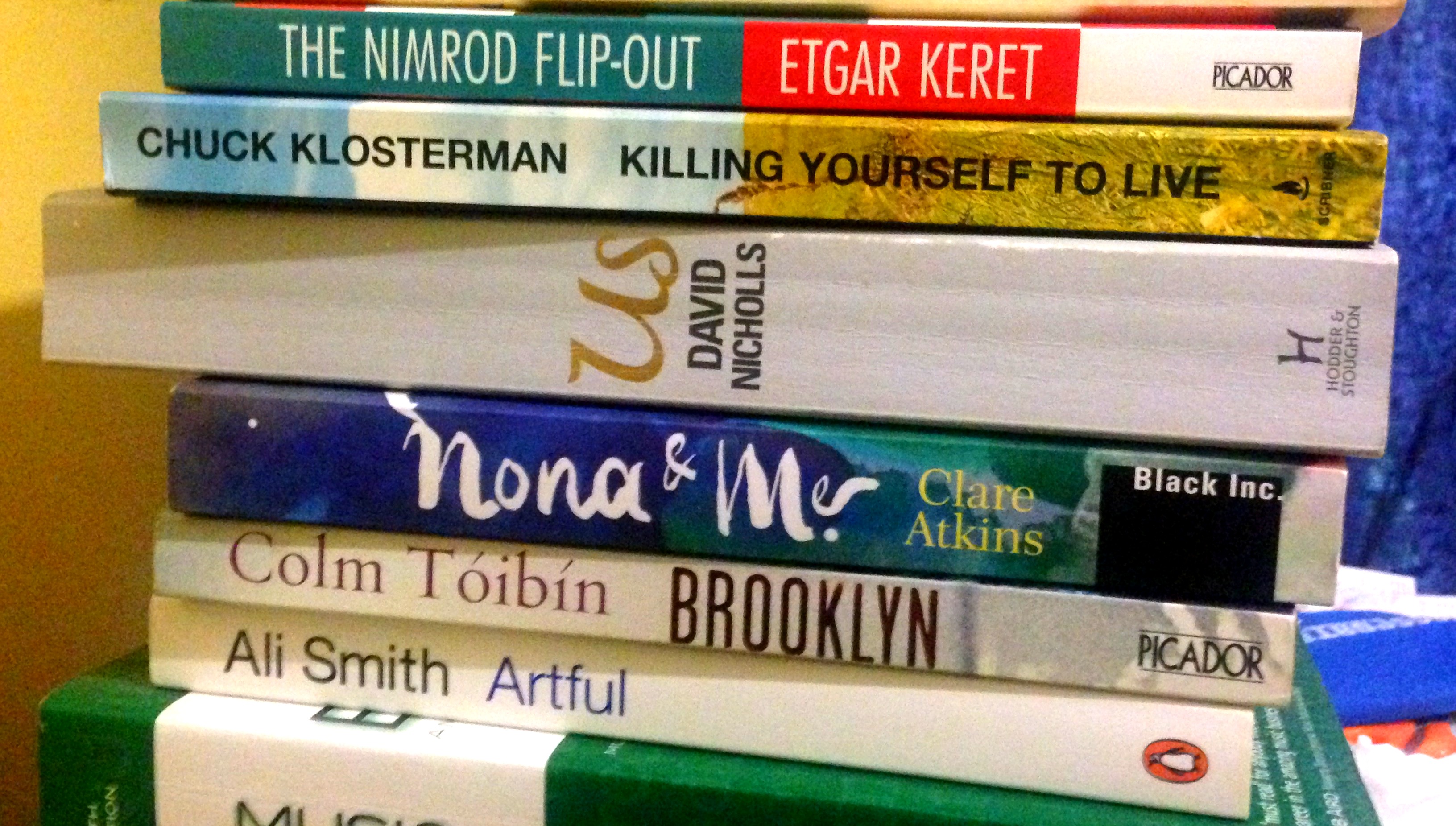 Okay, so I have this leeeetle fascination with music reviewers (Bernard Zuel in Raw Blue, anyone?) … but that’s not why I asked Daniel Herborn here today (although, shamelessly, I have now read many of his gig reviews, and you can do the same on his website, or read them LIVE in mags like Time Out and Faster Louder). I asked him because his first YA novel is out this month: You’re the Kind of Girl I Write Songs About and Cath Crowley and Nick Earls have had very nice things to say about it. The bonus for me was Daniel’s confirmation that being a music writer is EXACTLY as Almost Famous depicted it … (well … kind of). Enjoy! 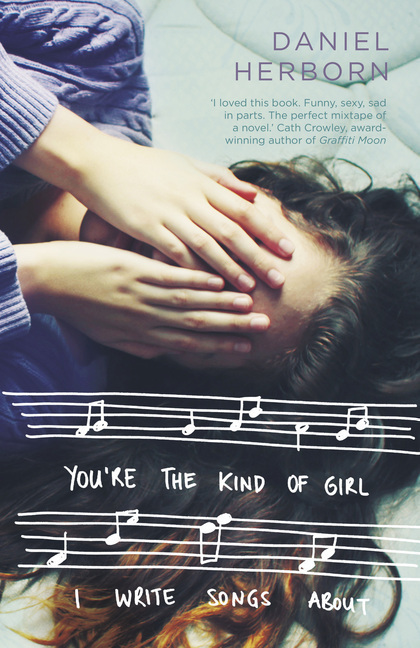 I’ve written about books and music for a long time and always meant to write fiction, so I guess it seems like a logical progression to write a novel that heavily featured music. It feels like it took me a while to get there though! I had also always wanted to write about the Inner West, which is where I live and which is an area that I had long been really fascinated by and felt passionate about. One night, I was sitting upstairs at the Enmore Theatre watching Death Cab for Cutie and I had the initial idea for the book and I remember walking home just feeling really energised by the whole concept.

Pretty much all of You’re the Kind of Girl I Write Songs About was written in Glebe and Forest Lodge and, to me, it’s not just a book that’s set in that area but very much influenced by those suburbs. It’s a realist and hopefully relatable book, so for me, it’s more about capturing the magic that’s out there in these bars and cafes and music venues, rather than conjuring up magic out of nowhere. That broader environment is much more important to me than where I specifically sat or wherever. 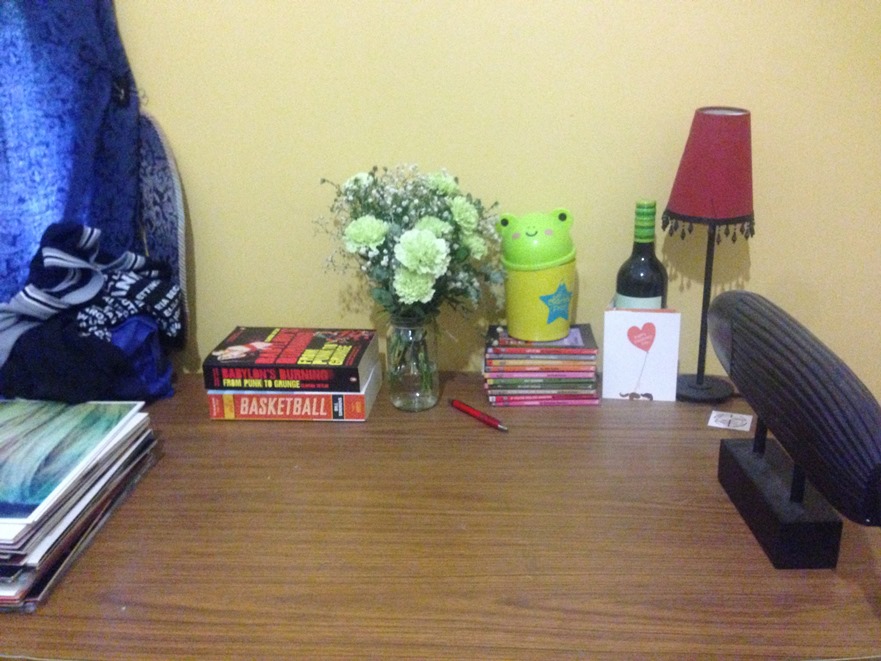 I like to free range a bit. I’ve got a writing table (pictured) but it’s often got stacks of books and vinyl on it. I definitely wrote some stuff sitting on the balcony or on the floor of my room. There was quite a bit of late night writing with this book, I would get home from a gig and still feel some adrenaline and write a bit more of the manuscript. 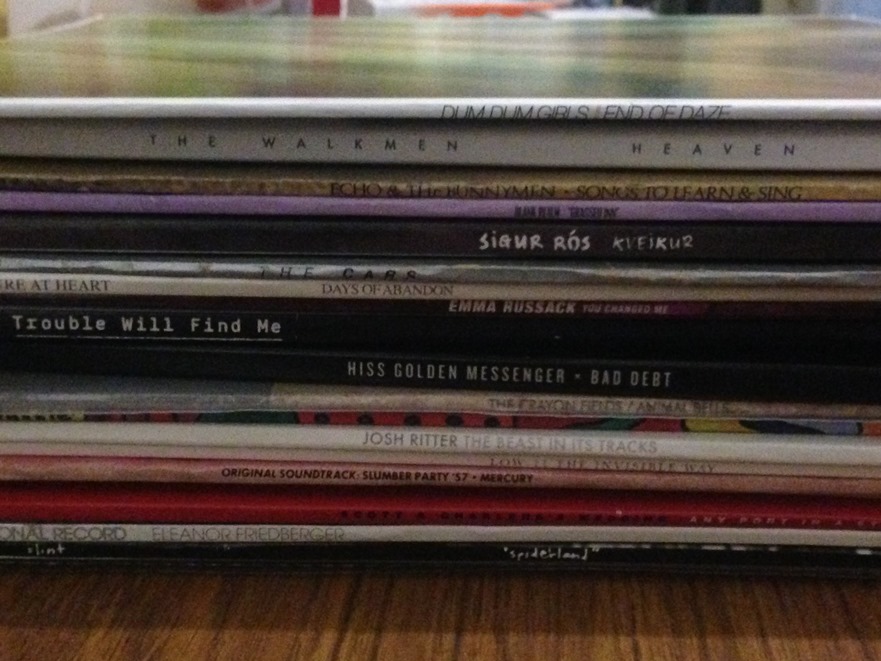 Also, the practicalities dictated how and where I wrote it. A lot of the time when I was writing the novel, I was working full time plus studying and doing a lot of music reviews and other non-fiction writing, so it was quite a haphazard process out of necessity. I might have a couple of weeks where I didn’t get a chance to look at the manuscript at all, but then another night I would write until the early morning. 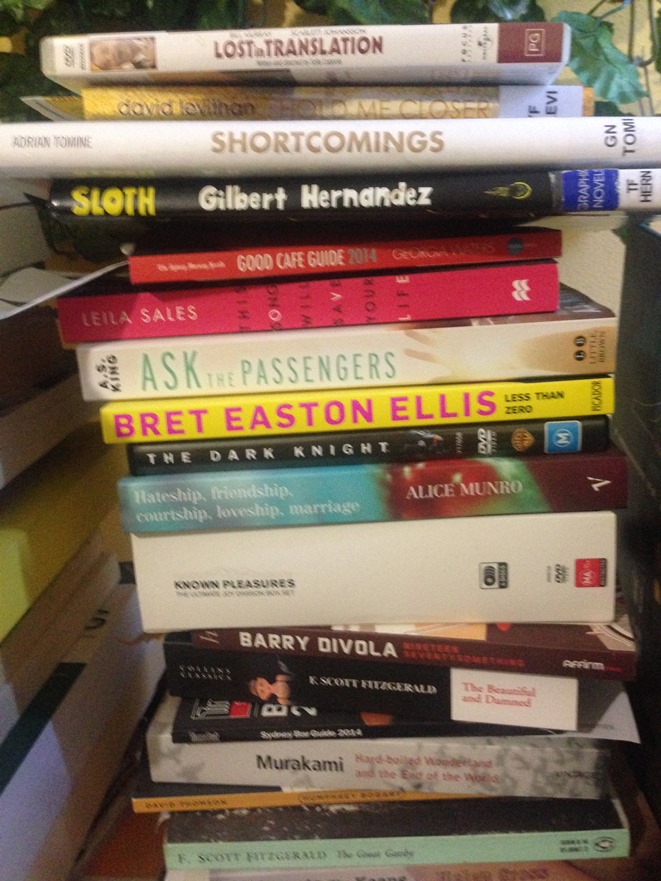 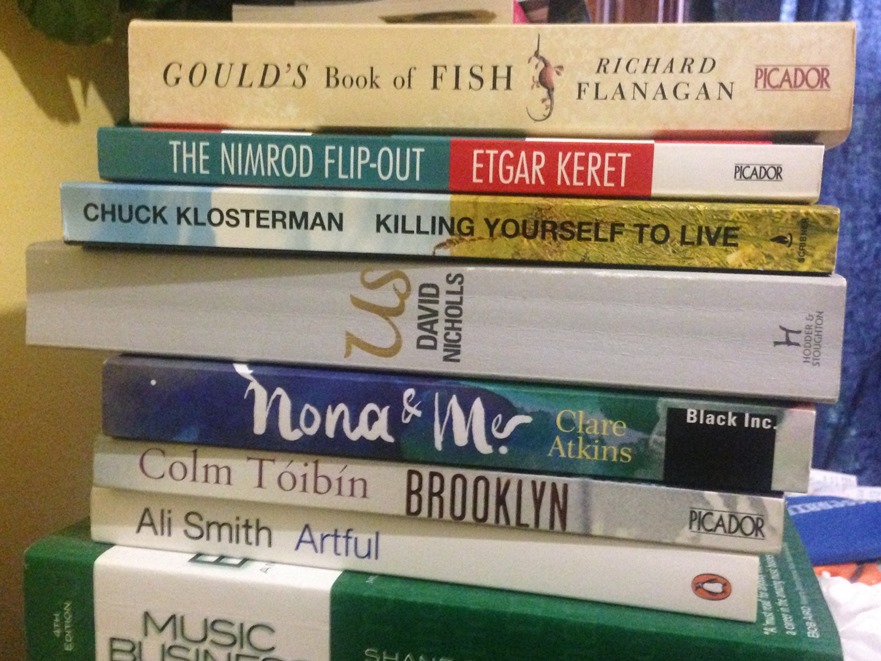 If these walls could talk …

They would say “You drink too much coffee” and “you can probably give that Sufjan Stevens record a rest now”.

Any books that you keep there that have special significance to you as a reader, writer, or person?

Truman Capote is my favourite writer, so I’ve always got A Capote Reader around. He wasn’t very prolific, but he wrote some phenomenal short stories and travel pieces and the best celebrity profiles anyone ever did, so it’s a really good reader to dip into.

Open door policy is great when you work in an office, but for me it would be pretty disastrous if I applied it at home when I’m writing. I sometimes put in my earphones and listen to music while I work, particularly stuff like Explosions in the Sky or Mono where it’s very evocative but you don’t have lyrics to distract you. I live with two film-makers, so they know what it’s like when you have to knuckle down and get something finished and are good at not interrupting. 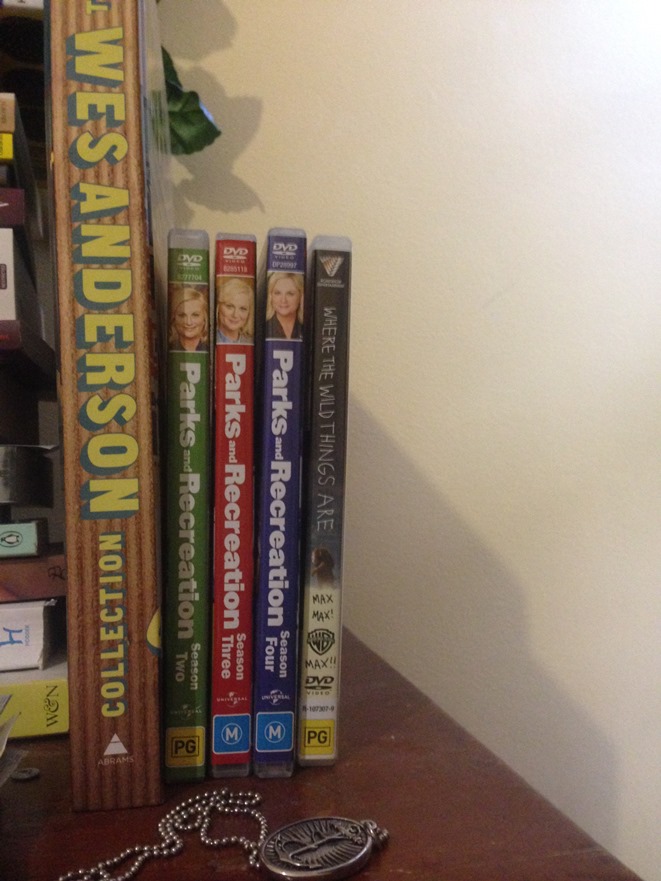 Social media – do you block it while you’re working, or let it come along for the ride?

There are some great things about social media and it certainly has its place, but I definitely don’t look at it all the time. Partly that’s just because it can be such a time-burner, but I’m also just a bit old-fashioned on this. I think most of your energy as a writer should be spent on, you know, writing. The work should be the main thing by far. I find it odd when you see someone bemoaning they have no time to finish their novel but then they’ve done 50,000 tweets.

Do we need a room of our own?

It’s an interesting idea and I think it’s different for everyone. Personally, I really need a balance. If I’m trying to get something done I need a place where I can block out the distractions, but I would go crazy without people and loud music and fresh air.

What you be sticking up on those walls?

I’ve got posters of Audrey Hepburn, Florence and the Machine and The Gaslight Anthem, an old Splendour in the Grass T-shirt and a couple of basketball singlets (I’m an NBA nerd). Also a framed Andy Warhol quote that I picked up at the Museum of Modern Art: “Art is what you can get away with”. 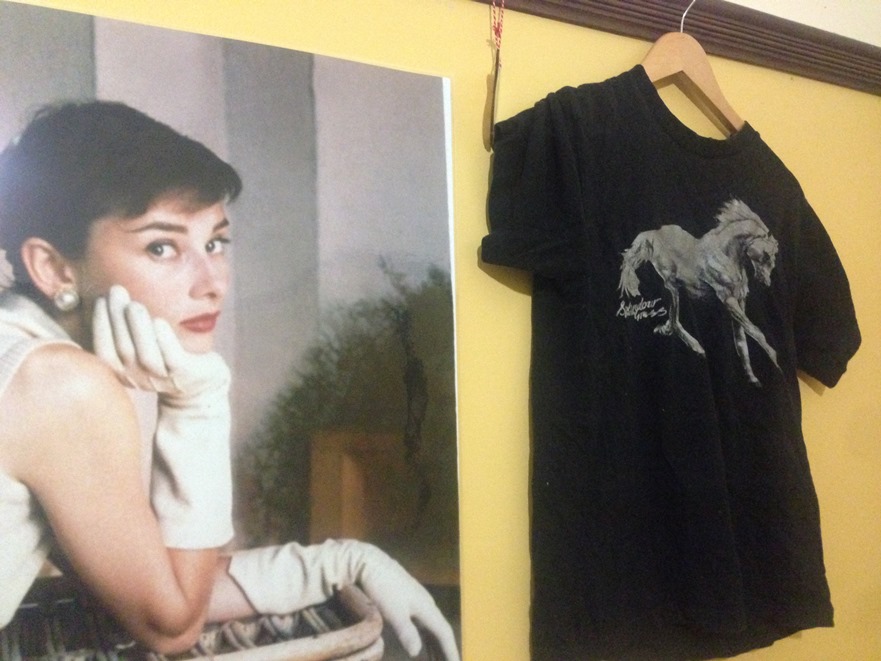 Almost Famous – is that how it really is, or what?

I wish! I’ve done a lot of music writing and the reality is far, far less glamorous. The idea of a rookie writer being commissioned by a magazine to go out on tour with a mid-level band seems like science fiction in the current climate. But on another level, it’s one of the best movies about the magic of rock and roll and though a lot of the specifics of the music industry have changed a lot, there is still something very resonant and truthful about that story. 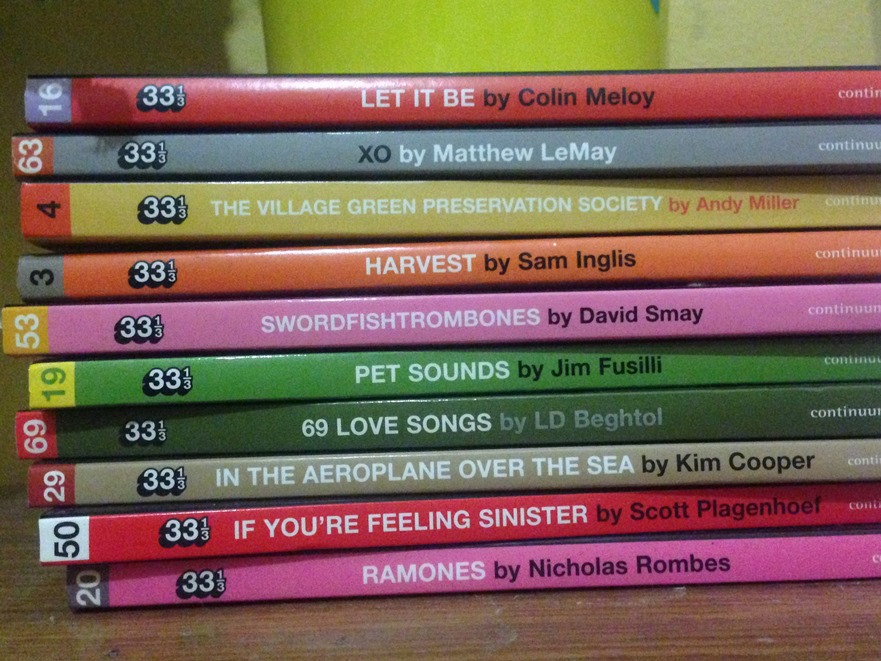 Thank you, Daniel! And welcome to the world You’re the Kind of Girl I Write Songs About.