Skip to content
Where the magic happens for Danielle Binks 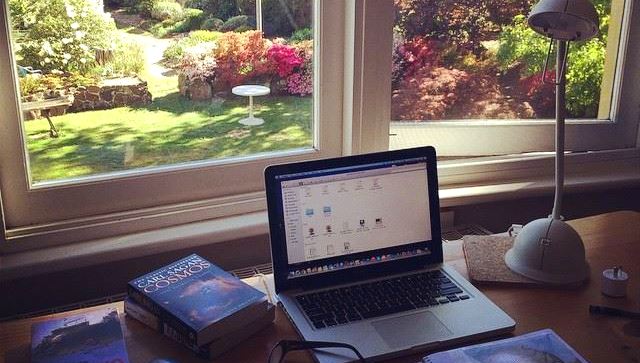 I am so happy to introduce this bright sparkling next guest! When we first met, she did a filmed interview with me, and then, as now, I was struck by her work ethic and passion for YA literature. We were both nervous, but we ended up having fun. And even though she might have acted all humble and quiet about it, I just KNEW I’d met someone who was also writing. Danielle Binks is a book reviewer on her personal blog, Alpha Reader, and one of Melbourne Writers Festival’s 30 Under 30 ‘next generation of writers.’  She is currently working on her debut YA manuscript.

PS. If you’d like to donate to the Melbourne Writers Festival’s 30 Under 30 Pozible crowd-funding campaign, you can do so by following this link: http://pozi.be/mwf30under30

So, rather than talk about my everyday writing space, I thought I’d take a closer look at my brief time in negative space. In art, that term means the space around a subject – I like that, if I think of myself as “the subject” – negative space may be most evident when, not the subject itself, forms an interesting or artistically relevant shape.

That sounds very wanky and convoluted. Basically I want to talk about a recent writer’s retreat I went on where I thought the power of the place would somehow bring out the best in my writing but SPOILER ALERT it didn’t.

In my most deluded fantasies I pictured creative-muses like dancing fairy sprites throughout the old English garden, sprinkling their wonderful ideas and writing mojo round the place. I was so convinced that I’d get there and belt out a final draft of my manuscript that I proudly announced this personal goal at the meet n’ greet on the first night. Yes – so foolish was I that I announced (out loud) to fellow aspiring writers, my plans to have a final draft by the end of my ONE WEEK stay.

What a poor, naïve fool I was – drunk on the possibilities of this place and her magic.

So it should surprise no one that it didn’t turn out that way.

The house was beautiful, the surrounding gardens and walking-distance town even more so. There was a fully stocked kitchen and plenty of quiet time for writing – actually, there were strict rules about no mobile phones/music/conversations during the day, so as not to disturb your fellow writers.

It really was an idyllic setting, but I withered in it.

The words, they would not come and every hour I sat down to a negative word-count, my despair quadrupled. I felt like a failure. I felt like the only writer in the history of this great house who came to this writing retreat and didn’t end up with pages and pages of story.

I went in expecting miracles.

I went there safe in the knowledge that the writing would take care of itself.

I went in with too high expectations and forgot that the most crucial element in my writing is me – not the room, desk, chair, correct lighting (though these things actually do all help…) at the end of the day and no matter the setting, it’s still just me sitting down and putting one word right after another.

Basically I was Holly Golightly on this writing retreat, and it took one of my writer’s group buddies to be my Paul Varjak and tell me: “No matter where you run, you just end up running into yourself.”

Once I stopped expecting the place to do the writing for me (okay. Now that I type it, it does sound really deluded), I stopped holding myself to the higher standard I’d set. I started free writing: any and every idea that entered my head I jotted down without fear of self-reprimand. I may not have come away with a finished manuscript, but I did have an amazing revelatory moment about my setting that unlocked all sorts of doors within the story and for my characters. And while I don’t think it was the place I was sitting down to write that helped me figure out my new setting idea, I think it was me in that place – that “negative space”, if you will – that made me see my world differently.

Thank you, Danielle! I’ve already said it to you, but I, too, have been the maker of the big-announcement-that-didn’t-come-off (Vogel entry in a month, anyone?). Hence, I admire those balls in others :) Also, I’ve just donated. Good luck! Wish I could be down there to see it.