Skip to content
Where the magic happens for Stephen Turner 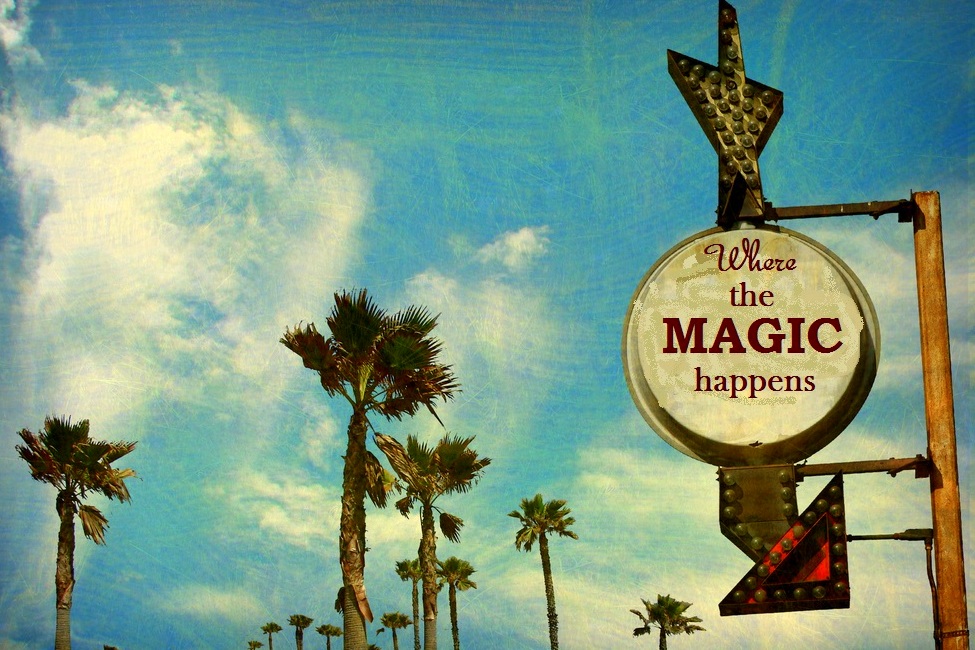 The second post in the series – more of a focus on the technological tools of the trade this time around. But first an introduction –  I met Stephen Turner in Coonabarabran, NSW, which is where he lives, and where the Feast of Words Writers’ Festival has been held at Coonabarabran High School for the last four years. I’ve been a guest there a couple of times.

He was a finalist for the Text Prize in 2010 and has featured prominently in several other writing competitions. His website is at http://stephen-turner.net and he’s on Twitter at SteveT_AU. He says he’s extremely flattered to be included in the illustrious company of this series! To which I say we are extremely flattered he could join us!

(While I think of it – I should also mention that you can click on the smaller images if you’d like to have a good sticky beak – say, at the book titles.)

Now over to you, Steve. Where’s the magic happen? 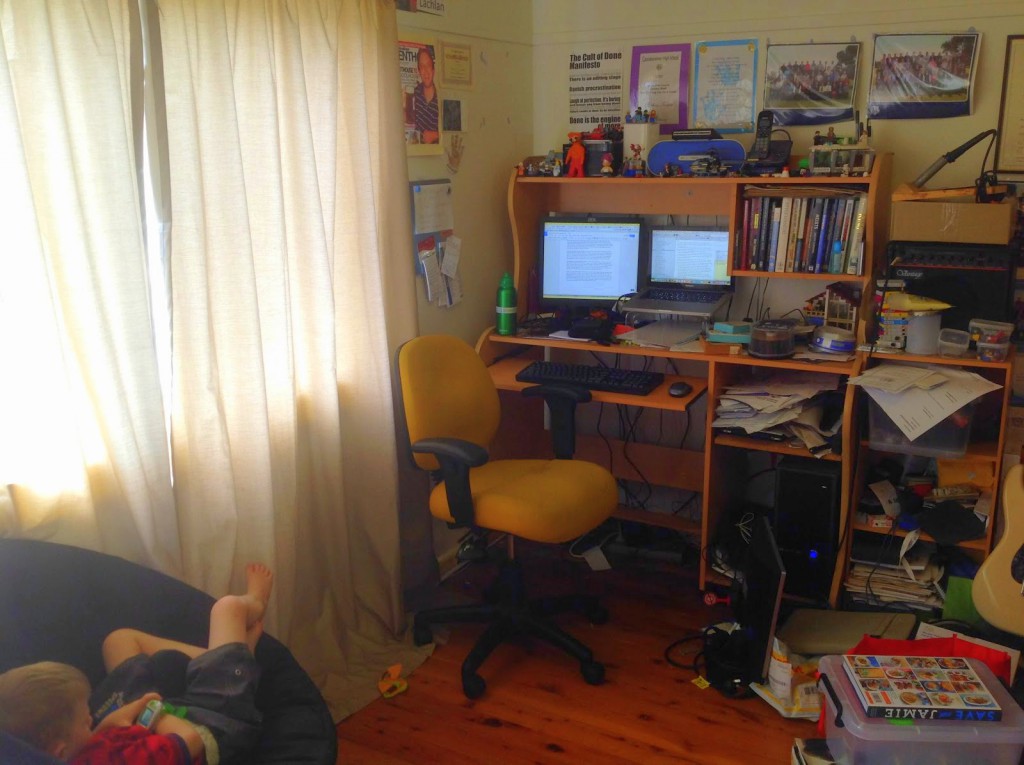 I love my writing gear and my writing setup and over the years it’s been good to me. However, right now there is one big problem so I should just get it out of the way — my writing room has no doors! When we moved into our new house 18 months ago in Coonabarabran in country NSW (the first we’d ever owned), I was able to stake out the front room as a large library plus writing area. I ended up buying a nice desk very cheaply at a local auction — the desk I used for years only cost me $25 and my current desk only cost me $55. But there are no doors on the room!

Over time I’ve always written on computer (well other than in primary school) and I’ve always had some kind of desk space to do it. I’ve written different things over such a lengthy period of time that my first writing computer was an Amiga 1200 (if that means anything to you at all!) For years I did use a couple of different Windows PCs, but for the last two years I’ve written on a MacBook Pro and I’m extremely happy with it. It won’t be for everyone, but as someone whose day job is with computers (that are almost entirely Windows) it’s always been a good thing to come home to something different.

I have some particular tools for writing that might interest you. One is my choice of software — Scrivener is a writing tool that has almost entirely replaced Word for me. It’s created specifically for writers and mostly for novelists, and it is amazing. The tools within it for organisation, outlining and structuring long-form work alone make it worthwhile. You can write non-chronologically with ease and maintain all your notes and research in the same file. I’ve been using it for some time yet I don’t even feel like I’ve been close to using it to its full potential. You’ll find other writers online raving about it also, so don’t just take my word for it. It was a Mac program for years but there is now a Windows version as well.

My other new weapon is my keyboard. Again, after reading a lot online about mechanical keyboards (used most commonly by writers and gamers) I decided to dive in myself. The Das Keyboard for Mac is in the middle of their range and is a jetblack beautiful thing that just feels amazing to type on. Mechanical keyboards are built with specific mechanical springs in each key and they are loud and satisfying to type with. I’ve only had mine a few months but it is noticeably different to work on and will increase your typing speed over time while decreasing fatigue. Since I also do a lot of web writing and design, it’s a professional tool I’ve been interested in for some time. Also for the heavy typists who might understand going through several keyboards a year, these devices are designed to last for years and take an enormous amount of punishment.

But all the tools in the world mean nothing unless you actually get the work done and as I mentioned, that can be interesting sometimes. My latest tactic is completely against all my instincts but truly does appear to be working. I’ve never been a morning person, but recently I decided to try the early morning routine. Rise at 6am, write for an hour or more, get ready, work at the usual time. It’s not easy, but if you can do it right, it’s a sublime feeling to know you’ve done your truly most important work nice and early, and it lets you ease into the night knowing you’re not under any pressure. It works especially well if you have a “day job”, because as much as I think I want to come home and write after work, so often that just never happens.

For all my technology, I still have a few books close by — and they’re all writing related. I have Stephen King’s “On Writing” and assorted Writer’s Digest publications that I picked up cheaply along with a few others. Sometimes I leaf through them for inspiration, sometimes it’s just nice to have them there. King’s book especially is a great read and full of inspiration, even if you’re not an avid reader of his fiction (which I’m not really).

Other than the tech and the books, my desk has a decidedly family feel, with pics and artwork from my children on the walls, and assorted Lego and figurines I’ve picked up over the years. Reminds of where I am and where I’m going, I think. If disaster struck though, as much as I enjoy the toys, I’d have to take the computers and the hard drives. Not only is that my writing, research, business and records, it’s my family pictures and memories as well. We all live digital lives now…

Social media is increasingly important to me as a writer, news follower, computer person and school staff member, but you won’t be at all surprised to know it goes right away when the writing is happening. The two definitely do not mix! In my early-morning writing schedule I won’t even look at news or social media before I start because it’s just not good for my headspace (especially with bad news but even with good stuff). I tried writing with Google Docs for a while but because it meant browser windows were open there were always just too many distractions. I’d turn off the Internet all together (and I do sometimes) except for the fact that my main source of music is the Rdio online streaming service (fortunately that has a separate app so again no browser windows).

Is there any magic right now? While I’d like to think so I know it’s just a daily slog, putting in whatever effort I can each day, getting up increasingly early so that I can do something while it’s quiet and trying for the best. Right now I’m into the fifth or sixth redrafting of a project I’ve been on a long time, one that won’t let me put it away and enough people have responded well to that I don’t think it should go away. It’s the characters that speak to me more than anything else and I think it always has to be like that otherwise you’ll never get anywhere.

My biggest enemy is persistence of effort — I’ll write every day for two months and then it will dry up for some reason and nothing will happen for six months — at least that has been the case in the past. Slowly but surely I see that changing, and oddly enough the biggest help has been to lower my daily expectations. Push for a really minimal amount each day (even between 200-500 words), but make sure it happens day after day without fail. Then you look up in four or six months and surprise yourself with how far you’ve come.

Finally, you don’t really need a room of your own at all, even though it can help. Stephen King tells a great story about writing his early books on a tiny table under an alcove, then when he had early success he bought himself a big grand desk that took up most of the room. But he immediately found he couldn’t work on it. Only by scaling back to something more modest and not letting it dominate the room could he work again. He let family and life be in the rest of the room — and that certainly describes my office!  King said: “Life isn’t a support-system for art. It’s the other way around.” And I couldn’t agree with him more.