I once met a man who had bought a house formerly owned by the author Morris West. Bet you didn’t see that coming. (Knowing who Morris West is isn’t really crucial to the rest of the story, but just in case -Australian author, hugely successful, started Vatican Lit, that sort of thing.) Anyway, he said that Mr West’s office had been specially constructed as a secret room. Then he asked me if I had an office like that. I felt I’d disappointed him when I said no, so I quickly added that when I sold 70 million books I’d get around to it, and I really appreciated the show of faith. What I regret now is that I wasn’t brave enough to ask if I could take a look at the room.

BECAUSE THERE’S SOMETHING SO COOL ABOUT SEEING WHERE PEOPLE WORK.

Hemingway had cats on the table. Were they really necessary? We’ll never know! 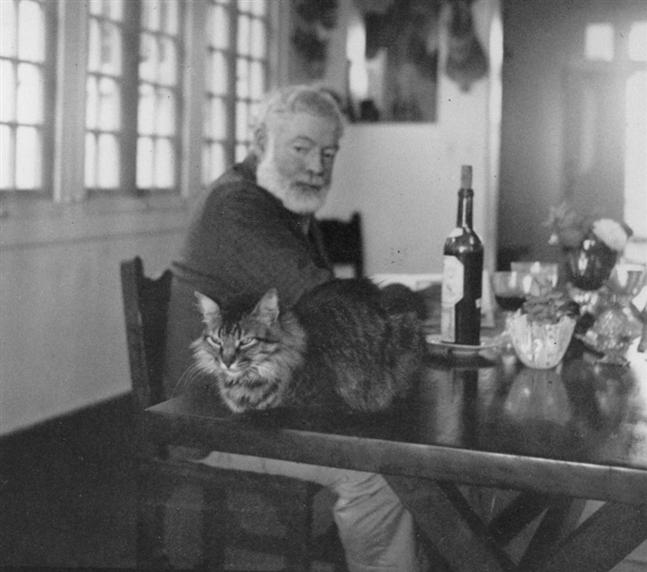 And then, recently, I cleaned up my own work space (no cats, no animal heads, no paintings of my office within my office …). Which got me thinking about how much has changed in that department since I first began writing, which got me thinking about where other people write, which awoke the sticky beak within, which made me wonder if I could hit people up to share that information, and so here we are.

And so, ahem … For the next year, on a regular basis (let’s shoot for fortnightly) a guest is going to turn up and talk about their work space (hence, the title). It’s sort of like MTV cribs but featuring people who write – not only books, but other things. Bill Condon will be kicking things off this Friday, and it’s very apt that he be the one who starts the ball rolling (for reasons that will be explained). I hope you’ll make him feel welcome.

My mum (who will also be featured; she’s writing a PhD in a shed) said that I should decide ahead of time when the end will be. She’s not keen on people starting stuff and then just breaking things off without warning, nor on things going on forever and ever. I thought that was good advice, and we thought a year was enough. So 2015 will be the year of peeking into other people’s work spaces. Next year I might bother people to share something else.

Okay. Hope to see you Friday!

Where the magic happens for Sandy Fussell

Where the magic happens for Shelleyrae (Book’d Out)

Where the magic happens for Bill Condon