While we’re on the subject of Night Beach (well, I was yesterday), or, more specifically, its influences, I’ve been down to see the Turner exhibition in Canberra. 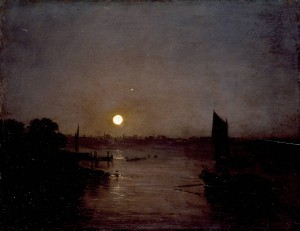 I like seeing paintings live. The first time I saw Eine Kleine Nachtmusik by Dorothea Tanning I was shocked by how small it was – and how perfect. And after staring at Hieronymous Bosch’s Garden of Earthly Delights all through uni (I’d find it in the art books section of Uni of Qld’s central library and study all that lovely perversion in preference to studying – probably a weird perversion in itself) seeing it for real was a big moment.

Likewise with Turner’s work.Reduced to a colour plate in a book, or viewed on the net, it’s impressive. But in the gallery, specially lit, it seems to glow with its own inner energy. That said, I was a bit bummed that the collection the Tate has sent didn’t have any of the works that I really love (like Fishermen at Sea, or Dawn after the Wreck).

The bonus, though, was seeing the painting above – Moonlight, a study at Millbank. It was from early in Turner’s career, and it’s much more detailed than some of his later paintings. It’s small and quietly framed, painted on wood. If I owned it, I’d throw away my television and put it there instead. It was funny watching people become absolutely still when they encountered it. I wonder why it is that oil on wood has a completely different feel and mood to oil on canvas.

I’ve also been reading Peter Ackroyd’s book, Turner. A few random facts: not long before his death, Turner remarked, ‘The sun is God’; he worked obsessively; there’s a lovely passage that describes how Turner stood and bowed to Norham Castle – depicted in so many of his works – as he passed it in a coach, in thanks for a breakthrough in his work; the place became embedded in his memory and mind, part of his personal mythology; and, lastly, this quote from Turner, teaching other painters:

First of all, respect your paper! Keep your corners quiet. Centre your interest. And always remember that as you can never reach the brilliancy of nature, you need never be afraid to put your brightest light next to your deepest shadow in the centre but not in the corners of your picture.

I keep thinking about that. Wondering what the equivalent would be in a writing sense. Where are the corners of a story? And where is its centre? Hmm …