To me, ‘design’ is the functional, working arm of art. Creativity within constraints, like time and money. As a huge reader, I’m influenced by book design all the time. I’d heard of David Mitchell, knew he was a great writer, but I never would have picked up Cloud Atlas if it wasn’t for the fact I loved the cover.

So how do you decide what goes on the cover? How do you convey a story with one arresting image?

Tony Palmer has worked as a book designer for various publishers since 1986, designing and crafting beautiful books for children and adults. He also worked as a teacher with Victoria University, teaching typography and design. Not only did he design the cover of Raw Blue (which I think is amazing), he also generously agreed to answer a few questions about his working process. 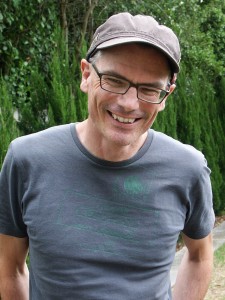 There’s more to book design than just the cover, isn’t there?

I sometimes look around the Penguin studio and wonder what draws and keeps designers here. I suppose there’s a variety of reasons, but a common motivation is books – those wonderful, three-dimensional, interactive, pieces of sculpture. The designers I know read them, make them, collect them and live them – so creating great book covers are often just the natural expression of a life that already exists.

What’s your general approach to designing a book?

Design is commercial. It’s not fine art. Any book I work on is not my own original and creative force. So, design starts at the beginning – the manuscript. There’s quite a bit of intuitive thought nudging before I even begin to think of any visual ideas: Who wrote it? Why did they write it? Is it any good? Why are we publishing it? What is it really about? Who is going to read it, and who is going to pay for it – two quite distinct questions…

And then there’s the design. Older designers, (and I’m one of them) used to be big on drawing roughs. I can even remember a time when there was no other way to do roughs. Unlike using software, drawing focuses us back on all those skills that make designs work – the wonderful and inexplicable balance between the hand, the eye and the mind. But times have changed. I’ve kind of noticed that younger designers seldom ever touch a pencil and their work is often just as good, if not better, than mine. But I still draw my roughs.

Can you talk me through an example?

I always felt a strong sense of presence of the main character in Raw Blue (and, yes designers do read the manuscripts, unless the manuscripts are really boring – I don’t think I read The Properties of Pre-Stressed Concrete), but I also wanted to get some kind of tension on the cover. Something that might indicate the main character’s back story. The publisher’s brief was pretty strong on this point as well.

So, I gathered a lot of material that was leaning towards this concept, things like: cracked glass, broken and burnt flowers, torn paper and cloth . . .

I usually gather this raw material without being too discriminate, you never know how two of the most unlikely objects might set each other off in some unusual and exciting way. But eventually I have to commit and stop sucking the world dry of raw material. This is when I open the software – the big three – Photoshop, Illustrator and InDesign.

This is also the time I start to think seriously about typography. For Raw Blue I wanted to tap into the surf culture – but I didn’t want to go too deep and brand the book as being a product of that culture (because Raw Blue is much more than that). I dug around the local newsagency looking at surf magazines. I had some ideas and eventually several fonts I liked.

Probably the hardest thing about design is selling it. Firstly I have to believe in what I’m doing, then I have to get the Art Director to like it. After that, I have to show the editor and the publisher and after that (Gawd) a small, select number of covers goes to a ‘cover meeting’ held by the various publishing, marketing and sales directors, and after that (Gawd, Gawd, Gawd) we then show the author (who usually shows it to their spouse, dog and butcher).

With so many people involved the amount of revision can be huge. So designers need a good sense of humour and a large dose of perseverance. Sometimes covers get so worked over and over they lose the initial ‘yes’ factor that the designer felt when they first did them. I’ve always felt obliged to never let anything I do become stale or dead because of revision.

The cover of Raw Blue was a little tricky, but not too bad. All of my ideas about tension were thrown out, and I had to go back for a second round of research. I think the tension idea was becoming too cerebral, and maybe just a little too smart for its own good. But on the second round of searching for images I came across the image of the girl. It felt perfect. Just couldn’t get past it. Adding in the background and colourising the images was the final stage.

Was book design always something you wanted to do? How did you get into it?

I got my first job as a book designer in 1986 (wow, that’s a long time ago). And, back then (before desk-top computers!) anyone from art school who was any good went into advertising or corporate design studios. Book publishers were considered to be the place where the art students with no talent got jobs.

But it’s fantastic these days. Everyone wants my job. I have the hippest, grooviest, funkiest design job on the planet. I think the onset of the digital age has dumbed-down the design industry so much that designing a print product like a book is now considered to be a vocation of great value – something really worth doing. Oh well, only had to wait 23 years to become fashionable.

Who or what are sources of inspiration to you?

Probably more than anyone, Chipp Kidd changed the way people looked at book design. Everything he does has an edge and he uses humour to great effect.

Massimo Vignelli had a big impact on me when I was a young designer. He brought such a wonderful, refined discipline to his work, and compared book design to creating cinema. I liked that comparison and still draw on it today – characters enter into the pages in the guise of fonts, or decoration, or images, they stay for a while and then move out of the flow of the book, but they may return later in a similar or changed form but still wholly recognisable as a distinct and individual voice. Such a liberating and exciting way to understand book design.

Lots of new designers come and go these days, and the proliferation of type and new typefaces is unbelievable compared to the limited choice we had twenty years ago. It’s funny though, I’m not sure the product is a whole lot improved since then.