A gothic story about the very dark things that feed the creative process. 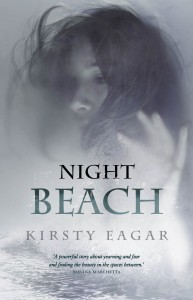 Imagine there is someone you like so much that just thinking about them leaves you desperate and reckless. You crave them in a way that’s not rational, not right, and you’re becoming somebody you don’t recognise, and certainly don’t respect, but you don’t even care. And this person you like is unattainable.

Except for one thing…

Abbie has three obsessions. Art. The ocean. And Kane.
But since Kane’s been back, he’s changed. There’s a darkness shadowing him that only Abbie can see. And it wants her in its world.

Shortlisted for the Queensland Literary Awards, the Western Australian Premier’s Awards and the Gold Inky (2012). Longlisted for the Davitt Awards.

‘A powerful story about yearning and fear and finding the beauty in the spaces between. There are images in this novel that take my breath away, dialogue that I envy and one of the most achingly real protagonists I’ve come across for a long while.’  Melina Marchetta

Save Syd and his horses. Let’s just remove the c