It’s raining here – squally, southeasterly shite – and there is a complete lack of surf. It doesn’t even resemble surf, it’s more like sea puff. But for some reason rainy days and dead poets seem to go together, so instead of surfing, I thought I’d bore you with this thing I’ve got for Rupert Brooke.

Here he is, looking all thing-worthy: 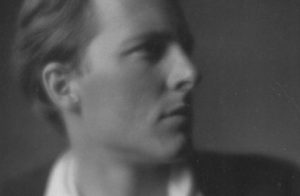 You probably already know about him. Especially if, like me, you had to study his poem ‘The Soldier’ at school. But it wasn’t the war poetry that got me in. It’s his other stuff. I love it because it’s young (which seems to be one of the reasons why it gets pooh-poohed – there you go, I have no taste). It’s not self conscious or ironic or cynical. It’s fierce feelings and yearnings.

Most of all, I love his references to the ocean. He was definitely a sea drunk.

Halfway through the first draft of Night Beach I came across a poem of his that I hadn’t found before. In 229 words, he’d pretty much taken the trip I wanted to go on (except that my first draft ended up being 115,000 words … so much for brevity).

It’s called Song of the Beasts, and it starts like this:

Come away! Come away!
Ye are sober and dull through the common day,
But now it is night!
It is shameful night, and God is asleep!

Just gets me every time. If you want to read the whole of it, click here …