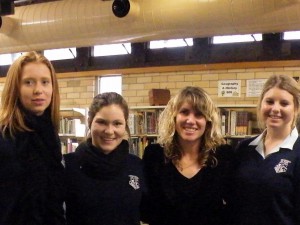 So I’m back from Coonabarabran, and Coona High’s Feast of Words festival. (Forever Dare, because it’s Coona High’s motto, and (III) because it was my third time out there). This school punches far above its weight. Just goes to show how good a public school can be when it has incredible staff and the support of a community. Feast of Pi is run at the same time as Feast of Words, which means a number of mathematicians visit the school, including, this year, Fred Watson, astronomer extraordinaire.

The general feeling is that since its inception Feast of Words is paying off. For example, Coona’s recent placings in the Henry Lawson Short Story Competition.

The students have had writers – and not just fiction authors, but also screen writers and journalist/lawyers – talking to them about the writing process for three years now. This year, knowing that they had the foundations, I could go a lot deeper with my sessions. The non-curriculum based approach pays off, too. Your ability to tell a story is not necessarily related to academic results. Its intuitive, something we’re hardwired to do. It’s just a question of showing students how to tap into it, and how to shape it.

I was surprised by how well my sessions worked. The students showed they were capable of producing high quality ideas and concepts in just a short period of time. To give you an example, everything we’d covered on character previously was neatly summarised and evidenced by the students in their responses during one five-minute exercise.

When it comes to teaching writing, one thing I always try to do is remove the blank page. I give the class constraints, so that it then becomes an exercise in problem solving – and much less intimidating. This year showed me just how creative people can be when faced with constraints. From now on, I’ll expect more.

Thank you, Coonabarabran! Thanks to all of the staff at Coona High for inviting me back again, with especial thanks to Kellie Nash. Thanks to the other presenters – Patrick May, Michael Morrisey, Paul Stafford, and Nerelie Teese. And last, but definitely not least, thanks to the students for making it such a rewarding experience!

And for a laugh …