One of the reasons I love my publisher @allenandunwin is that the people there give you great career advice. So, like, this is my new author head shot, because according to Lisa Watkins (super rep) using your book for ears and downlighting is the way to go. Thanks to Lisa for the solid. #summerskin #melbourne #dymocksmelbourne #writinglife #ontourfortoolong #dontgetoutmuch #bookstagram #loveozya

It’ll give you nearly 3 hours of auditory pleazzzure. But – plot twist! – it’s not 100% correct. The real playlist is the chapter list. Every chapter is a song title (and the artist is mentioned somewhere in the corresponding chapter – except Ch.23, Everything is Embarrassing, because Sky Ferreira, the artist, is mentioned at the end of Ch.22 instead).

Nor could I include ‘Pictures’ by Wish.

So I stuck ‘How Do You Do It’ by Empress of in there instead because I’ve been listening to it a lot lately.

Also I substituted ‘This is what makes us girls’ by Lana Del Rey, for ‘You can be the boss’ – also by Lana Del Rey. If you do a search around you’ll probably find it. It’s one of her demo songs from when she was early into her ingenue phase. (On this – when will she release those demo songs? Is that planned? Has it happened?) Anyway, my original choice goes a lot better with that chapter (which is one of the controversial ones, apparently).

And everything else is the same.

The chapter list is included below, just in case you are the obsessive type (like me, obviously ;).

Summer Skin officially cast forth into the world

Yes, I know, I feel like it’s been around for ages too. But it came out yesterday, on the 27th of January, and of course I have to say the date because 27 is my lucky number. My best friend, as best friends do, went straight down to her local bookshop and harassed them (which they didn’t mind because she also buys lots of books from them) and asked why it wasn’t in the YA section, and they said:

Oh, no, it’s too sexy for that. We’re putting it in Adult

I also want to say a big CONGRATULATIONS to Justine Larbalestier, whose book My Sister Rosa went out into the world on the same day. When you read it – and you have to because it’s one of the most suspenseful novels I have ever read – you will agree that the idea of Rosa being out in the world is actually quietly terrifying. But as long as she’s contained within pages it’s a very good thing. I am wildly excited about doing Sydney and Melbourne launches with Justine, because we bounce off each other really well, and also because she’s a top chick. (We also did a podcast together at Booktopia, and I’m putting it in a following post).

And another big CONGRATULATIONS to Megan Jacobson who debuted yesterday with her novel, Yellow. My comments after reading a review copy were quoted on the jacket: ‘This story has such a generous heart. I loved it. Utterly unique and beautifully written, Yellow pulls you into the rhythms of life in a small coastal town; its beauty and its harsh realities. But it’s the supernatural element that illuminates the story, weaving through the loves and hopes of characters you care for deeply. I was there every inch of the way with Kirra, as she fought for a future she could believe in, and I cheered for her too.’

I’ll leave you with one more thing. I did an interview with Libby Armstrong, owner of a new bookstore opening in Sydney: Beachside Bookshop (above). I have mentioned this new bookstore a lot on social media, but can’t remember if I have mentioned it here. The important thing is that it specialises in Children’s and Young Adult literature. Whoot! Whoot! The other important thing is that Libby is heaps of fun and second generation YA bookseller – Ruth Park was her pen pal – yes, I’m serious. So if you’re in Sydney, go and say hello (or come to the launch of the bookshop in Avalon on the 18th – details here). And in the meantime, watch the video above. It was filmed, directed and edited by Tom Sanderson, an incredibly talented young filmmaker. Plus Tradies.

PS If you do happen to read Summer Skin, I hope you like it, and thank you for all the support you have shown me in general (not just if you read it).

Some thoughts (mine and others) on sex in teen literature

Jo Stapley runs the UK blog Once Upon A Bookcase and is holding a month dedicated to examining the topic of sex in teen literature. There’s some fabulous reading here, people – reviews, interviews and opinions. Space has also been given to the topic of sex crimes, and I was interviewed by Jo because she has read and reviewed  RAW BLUE, which not only deals with the aftermath of sexual assault, but has a story line that involves the main character reclaiming her own sexuality through eventually having a healthy sexual relationship. A couple of quotes:

… it occurred to me while writing it that the most powerful thing Carly was going to do was reclaim her own sexuality. And she does that. But she can’t until it’s with the right person. Ryan does earn her trust to an extent, but I also had the feeling that there was a strong sense of urgency for her. I didn’t want her to exhibit perfect, socially approved, ‘good girl’ behaviour. I wanted her to be real. Real is helpful to the reader. Perfect just makes people feel like they fall short. I’m not interested in perfect at all. It doesn’t exist.

To read the interview in full, please click here. 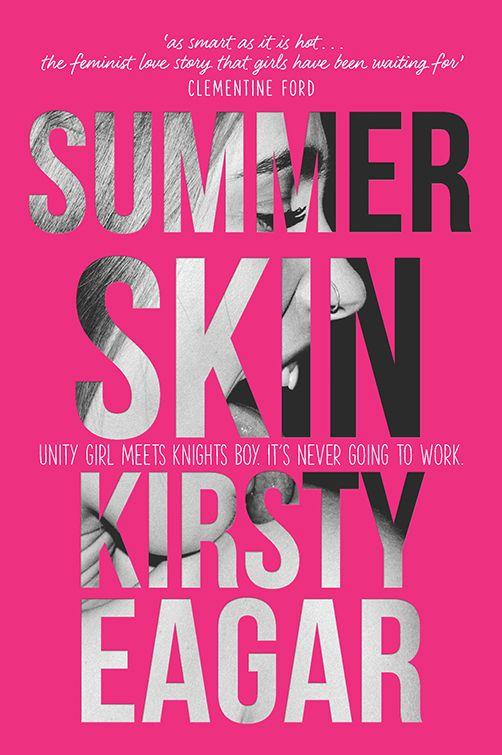 And if that heading isn’t good English I just don’t know what is. More formally – if you’d like to read an Extract (with a capital E) of SUMMER SKIN, then click here. And if you take the leap of faith and pre-order I will obviously love you forever! Just a heads up – the suggested age on this one is 17+, okay?

Also, consider this a cover reveal (worst kept cover secret in the whole world). Look! Clementine Ford! Clementine Ford!!!! For whom I have all the loves. And, double also, I have some really exciting news re: the launch, but I’ll save it for later, else my head will blow up.

Happy Friday! Hope things are humming for you!!!

5 copies up for grabs. 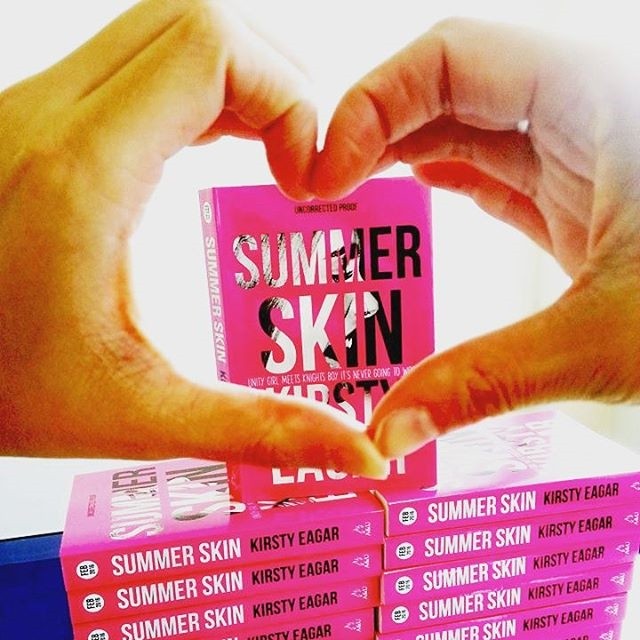 Excitement! Excitement! The Bookish Manicurist has done a Raw Blue manicure!!! This is the Oz YA equivalent of having a sculpture erected in your honour. You can check it out, along with the review and tome tour photos HERE.

People who’ve read Raw Blue keep saying they liked Danny. Which is nice. Because I liked him, too. A lot.

Anyhow, then they either: a. say they know someone else with synaesthesia (or synesthesia as it is spelled in other places); or b. want to know more about it. Thing is, Danny just had this thing where he related colours to people from before draft one (when the whole story was brain soup). It was later I read an article on synaesthesia and realised it was along the lines of what I’d been thinking.

That said, people→colour synaesthesia hasn’t really been explored much in the research on synaesthesia*. Danny also got colours from letters and days of the week, which is a more common manifestation of the big S. And it doesn’t have to be just colours, some people get a sense of taste, or hear sounds.

(*If you are uber into this and want to know more, you can check out this as a jump off point. Or, if you want to get all scholarly, you can contact me for a list of references…)